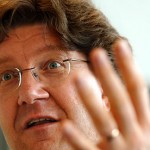 Mark Byford is head of the three BBC outlets that India gets to hear and see — World Service Radio, World Television and News Online. At 6’6, he is a giant of a man with big ideas about where he wants the BBC, arguably the world’s most respected international broadcaster, to be by 2006.
That goal includes being on FM in India, where BBC radio currently rules on crackly shortwave and World TV is in 11 million households. But right now, Byford is busy organising the BBC’s global party marking its 70th birthday. Rashmee Z Ahmed met him in his office, in World Service Radio’s historic London home, Bush House, on the Strand:
What’s so special about a 70th birthday? Is this just a thinly-veiled excuse to market yourself?

Well then, an excuse to market yourself?
It’s an opportunity rather than an excuse, to reflect on where we’ve come from, where we’re going, what our challenges are. We’re not doing it every year, or every decade. The danger with anniversaries is that you look back.
We want it to be an occasion for doing that too, but mainly for looking ahead.
Looking ahead to what, say in India, which the BBC reportedly finds a difficult market?

That sounds like a negative, that it is difficult, a problem. I don’t approach it in that way. India is an important market for us. It’s a challenging market because what is happening in the broadcasting marketplace in India in terms of expansion of television, of less usage of radio, is pretty unique in the world.
Our latest research shows that less than one person in four is listening to the radio in India today. That is not happening in most broadcasting marketplaces around the world.
Even in the developing world, that’s seen rapid expansion in television, radio still holds up. In India, radio has fallen in terms of overall usage. That obviously presents an issue for the BBC per se. But within India’s regulatory framework we cannot broadcast news and current affairs on FM, so it presents a challenge for audibility too.
We approach India with a multi-media strategy. World TV is doing well in India, it’s the market leader in international news. For radio, it’s up to us to work out what in content or delivery we’re offering not just in English, but in Hindi and other language services. And there is the recognition that the Internet, from a low base, is growing rapidly, so it’s a tri-media offer.
But would you focus on World Television as India is a television-dynamic market?

No, you can’t be that exact about it. In a country where television is hugely important, it is very important that the BBC’s offering of news and information has a strong TV element. But you can’t say that radio and the Net are not important.
Our challenge for radio in India is that they may love the content but they can’t hear it. We are now on FM in 135 countries around the world, but not in Delhi. We’d love to be. But we have to respect local regulations.
We have now to consider which audience groups we are trying to reach, and how we can lay our content so that it meets their expectations and needs. And how we can improve our delivery.
Lots of questions. Have you found any of the answers yet?

To remain flexible and fleet of foot. We recognise first and foremost that in terms of importance, India is a critical market for the BBC. Both in geo-political terms, and audiences that we want to reach.
When you talk of Indian partnerships, will any of this be affected by the fact that the Indian government has given the go-ahead for foreign direct investment in the media sector?

Not directly. What we have to do is find out who we are trying to serve, and what is the best way we can provide our wares so it stands out as distinctive, using a delivery medium that meets our needs.

You’ve constantly talked about all the things you need to do, but there isn’t very much about what you are doing. After all, recent figures revealed a sharp fall in Indian listenership of World Service.

I think you’re being unfair. The audience figures that came out this year were the first all-India figures we had, but over the last seven years we could see that the overall audience trends for radio were declining.
What these figures show is that the audience has gone down from about 27 million over that time, not in one year but since the last all-India survey, to about 50 per cent of what it had been before. That was not unique to the BBC. Overall listening to the radio had gone down from 54 per cent, to, I think, 19. Did we sit back and say, “Oh, interesting?” We actually established a group, for our strategy for India. The idea that there’s nothing is completely untrue, the idea that we’ll solve it all in one day is just as untrue.