Literaturwurst and other good things

Washington, D.C.: The sausage factory factor in news production. Twiggy in a newspaper dress. The Token Times with job adverts that tick all the right boxes but do nothing to address the core problem of discrimination. Italian poet F T Marinetti’s shocking 1909 manifesto for a future that is free of the past (sans museums), as front-paged in Le Figaro. The National Gallery’s ‘Shock of the News’ exhibition is both provocative and thought-provoking.

The exhibition, which is just six days old today, is described by the Gallery as an examination of “the many manifestations of the ‘newspaper phenomenon’ from 1909 to 2009.” That was, it says, “a century during which major artists engaged in a vibrant and multifaceted relationship with the printed news by co-opting, mimicking, defusing, memorializing, and rewriting newspapers.” http://www.nga.gov/exhibitions/shockinfo.shtm 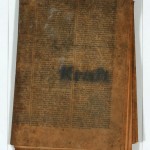 He impregnated a newspaper that made the case for German reunification with fat because this signifies solidity and strength. He  then wrote ‘kraft’ (German for strength) on the article to reiterate the point that unity means strength and his fractured country badly needed to realign. Beuys died four years before the Wall came down and his dream became reality but the novel way in which he argued the case using his daily newspaper is striking.

So too Marcel Broodthaers’ ‘The Black Problem in Belgium’. Pitch black eggs embedded on a newspaper symbolise Belgium’s deep (and disregarded) racism as evident in its treatment of the Congo. Broodthaers created the work soon after the Congo shrugged off the colonial yoke and became free of Belgium.

The Guerilla Girls’ offering (see right) is particularly appropriate to our politically correct age. Each job advert symbolises the ‘check-all-boxes’ syndrome. As the artist/artists, who insist on anonymity, say, “the art world needs help. Is tokenism a solution to discrimination, or is it part of problem?”

It runs till the end of January. It’s well worth a visit.