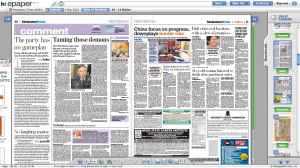 In the one month since David Petraeus resigned as head of the Central Intelligence Agency over an extramarital affair, there has been much heat and almost no light shed on America’s schizophrenic relationship with sex. An excessive puritanism drove the General from office just a few days after parts of America defiantly displayed a pronounced social liberalism at the ballot box in the November 6 election.

On that historic day, three American states — Maryland, Maine and Washington State — became the first in the country to legalise same-sex marriage by popular vote rather than court rulings and legislative action. Meanwhile, a fourth state, Minnesota, rejected a referendum to make gay marriage unconstitutional. And America’s first openly gay politician was elected to the Senate.

Within days of these social tremors, however, General Petraeus, one of the most admired military leaders of his generation, was forced to resign over an adulterous liaison with a consenting woman.

So, is the US a socially liberal country trapped in a conservative straitjacket? Or is it the other way round? Marty Klein, California sex therapist and author of America’s War on Sex, recently explained his country’s vibrant sexual freedoms and matching puritanical zeal as follows: “Two words — mental illness! When people ask me is America getting more progressive sexually or is it getting more conservative, I just answer: ‘Yes’.”

It is probably safe to say America is as conflicted today as it ever was. Not since 1831, when President Andrew Jackson had to bow to the puritanical inevitability of Washington life and accept the resignation of his scandal-plagued Secretary of State, John Eaton, has sex and innuendo so bowdlerised American public life that nothing will do but for heads to roll. Back then, Eaton had discernibly done nothing more titillating than marry a flirtatious and attractive young widow of his acquaintance before the statutory year of mourning for her dead husband was up. Yet the Petticoat Affair, as it came to be known, was used to attack President Jackson’s moral judgment and by extension, his administration’s policies and appointees. Jackson was forced to accept Eaton’s resignation and the business of government continued.

If anything, the contradictions are more stark than ever today. There has been great and lasting change in social and political acceptance of divorce and of gay and lesbian lifestyles. Once upon a time, divorce decisively disqualified any thoughts of high office for American politicians who had parted from their spouses. In 1968, it proved fatal to Nelson Rockefeller’s attempt to win the presidential nomination with Senator Prescott S Bush (father and grandfather of future presidents George H and George W Bush) condemning his wealthy, moderate, fellow Republican on the triple count of infidelity, divorce and remarriage. But by 1980, when Ronald Reagan became America’s first (and only) divorced president, the issue arguably became secondary, if not irrelevant.

It has been the same with gay politicians. Barney Frank, the gay Democratic congressman from Massachusetts, spent two decades in public life before revealing his sexual orientation. That was in 1987. Now, there are a handful of openly gay or lesbian members of the US Congress and last month, the unapologetically lesbian Tammy Baldwin was elected to the Senate from Wisconsin in the Mid-West.

The contradictions continue apace. The American sex industry is worth a massive $12 billion a year, which is roughly one-tenth of the equally unwholesome but more filling fast-food sector. Even in American sport, there is an entity called the Lingerie Football League, whose female players are chiefly distinguished by their skimpy outfits while their teams bear names like the Los Angeles Temptation. America’s deeply sexualised modern culture includes the popular Bratz dolls, whose miniskirts, fishnet stockings and feather boas have been criticised by the American Psychological Association as “worrisome… when dolls designed specifically for four-to-eight-yea olds are associated with an objectified adult sexuality.”

But, despite all of the above, the extreme right continues to wage a strident culture war, which rests on three pillars of strategy and they all have to do with sex: contraception, abortion and gay marriage. As Nancy Cohen, author of Delirium: The Politics of Sex in America, points out, the extreme right is less popular but more powerful than ever before and it has managed to create a political climate in which America has been forced to debate the scientific inaccuracies about “legitimate rape” and “foetal pain during abortion” and ponder whether women who use birth control are no more than “sluts”.

This is regressive, any which way one looks at it. Mostly, of course, it does not square with the liberal mores that led voters in two states (Colorado and Washington) recently to legalise the sale and use of recreational marijuana; for three states (Maryland, Oregon, and Rhode Island) to approve or expand casino gambling and voters in Florida to uphold public funding for abortion.

“I think I can see the whole destiny of America contained in the first Puritan who landed on those shores,” French aristocrat Alexis de Tocqueville wrote in his 1835 classic Of Democracy in America after visiting the United States. Might he have been more prescient than he supposed and do present-day Americans still display the austere mindset of those prim English Protestants who arrived in the New World in the early 17th century? As one commentator put it, the Petraeus affair showed that America can handle its generals lowering their flags but not their trousers. Perhaps this is why it is a cliché that best sums up its appalled fascination with sex — the spirit is willing but the flesh is weak and only the ritualised spectacle of a public shaming can tame the lusty demons within.

Rashmee Roshan Lall is a senior journalist based in the US

The views expressed by the author are personal