All is colour, chaos, exuberance, ecstasy. 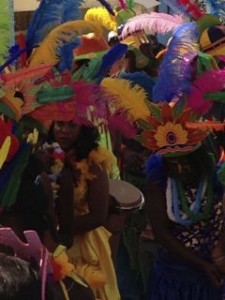 In Jacmel, Haiti’s Prime Minister led the parade (in jeans and sneakers), the tourism minister danced and sang seemingly without a care in the world, foreign envoys wore absurd eye masks and the people jammed the streets, an avalanche, or as they say in kreyol, lavalas.

Giant packets of cigarettes, buckets, boxes of soap and bottles of Barbancourt Rhum ‘walked’ through the town – many of the daily features of ordinary Haitians’ lives. “Pa boule plastik” read one of the first signs in the parade. The kreyol injunction against burning plastic was just one of the multiple socially aware messages borne aloft through the throngs of happy people, as they imbibed wom (kreyol for rum), ate griyo (fried pork), banan pesse (fried bananas) and pikliz (chile-hot Haitian coleslaw). 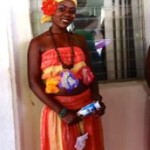 Almost everyone might have been a carnival queen. Cheeks and eyes were fabulously painted, gold dust shimmered on bare shoulders, fingernails were carefully multi-coloured.