No Housekeeping in Haitian Creole; circus time in Florida Come one, come all. A day spent at the Ringling Museum, established by America’s circus family, gives one a ringside seat in the ‘Big Top’ that is Sarasota.

For, it was Circus City, USA. Sarasota has been witness to more than three-quarters-of-a-century of frenetic circus activity. 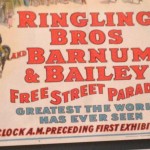 It all started when the Ringling Brothers – five of seven siblings of a German immigrant family from Wisconsin – moved the winter headquarters of their Ringling Brothers and Barnum & Bailey circus to Sarasota in 1927.

It was the height of the circus boom and Sarasota became a veritable “congress of nations” with one account describing the Ringlings as employing at least 22 nationalities at any one time. There were probably a lot of bearded ladies and sword-eaters around as well.

The Museum, where we spent many happy hours, goes back in time.

The Ringlings began their first circus in 1884 and by the late 1880s, it was one of the largest and best-run in the US. In 1907, the Brothers acquired the Barnum & Bailey Circus (“the greatest show on earth) and henceforth advertised themselves as the “kings of the circus”.

The museum has much of what made a circus. The bandwagon. The calliope. Posters (many many posters, for advertising is the very lifeblood of the circus business). The  Museum was established in 1948 to honour the memory of John Ringling, whose rather extraordinary home (patterned on the Doge’s palace in Venice) is right next door.

More on that tomorrow.

The Sarasota museum was the first in the country to document the rich history of the American circus. It  features  circus artifacts, including costumes, props and sideshow banners.

One of the more extraordinary exhibits is the Howard Bros. Circus Model, the world’s largest miniature circus, which gives  a sense of the scale and complexity of the Ringling Bros. and Barnum & Bailey Combined Shows of 1919-1938.

Imagine, the show travelled in 150 railway cars, setting up a “city without a zipcode” within just a few hours, feeding 1300 employees (and the animals) three times a day and performing to wondering audiences as large as 15,000. For just one day. The very next morning, the circus would be gone. On to the next location.