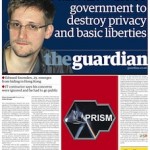 Edward Snowden is a conundrum. Change the spelling of his surname just slightly and he might almost be English. Consider what he tried to do – show up government and assert the essential rights and privileges of the people, the final arbiter – and he seems so very American. And yet, he did break the law and tell on others who were breaking the law. And he did tell the world a load of things that we already knew – namely, that governments spy on other governments and intelligence agencies are nothing, if not a dirty tricks brigade.

So what’s the value of what he’s done? Many say, nothing or very little. Others believe that he has struck one more blow for freedom, transparency and openness in government. I wish I had more confidence this will have a deep and lasting impact. At any rate, it is an admirable aspiration.