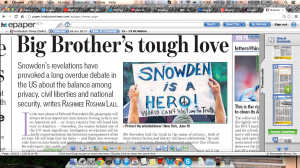 In the next phase of Edward Snowden’s life, geography will always be less important than history. So long as he is not on American soil – or in any country that will hand him over to America – Snowden, the source behind one of the US’s most significant intelligence revelations will be chiefly concerned about the historical consequences of his actions. He will hope that his leaks – and flight into overseas exile forever, sans family and girlfriend – prove to be worth it. He will expect that public pressure forces the US government to end its warrantless mass surveillance programme at home and abroad. He will fervently pray that the Establishment fails in its attempt to explain away the snooping as tough love to keep America safe from terrorist threats. Or, in George Orwell’s prescient words, as a manifestation of the reality that “there will be no love except the love of Big Brother”.

Will history oblige Snowden? Long ago, Philip Elmer-DeWitt, TIME magazine’s first writer on computers and the internet, said that some people make headlines while others make history. Might Snowden be in the first category? Elmer-DeWitt was writing on the new wired world, in its first dawn, and perhaps he could already, dimly, discern the intensely fickle parameters of its debate. (Or perhaps he was just being pithy.)
Snowden’s revelations have managed to provoke a long-overdue debate in America about the proper balance between privacy, civil liberties and national security, but public sentiment is mixed and mercurial. There may be no great historical consequences of his revelations, going by the tangled nature of the arguments for and against. Consider this:

A Washington Post and ABC News survey found a surprising level of comfort with the concept of daily surveillance, with 58 per cent of Americans supporting what the poll termed ‘intelligence-gathering programs’;

The same survey also confusingly found that only 43 per cent of the same respondents supported Snowden being charged with a crime for leaking top secret government documents to the media;

The majority of the same people supported public hearings on the practices of the National Security Agency (NSA), which is legally responsible for the collection and analysis of foreign communications and foreign signals intelligence, but which, as Snowden revealed, seems to dabble in domestic information-gathering as well;

A fraught moment on NBC’s ‘Meet the Press’ show offers an interesting illustration of some of the competing sentiments surging in American breasts. Glenn Greenwald, who wrote about Snowden’s revelations for The Guardian, was asked by programme host David Gregory why he too should not be charged with a crime for having “aided and abetted” the whistleblower.

Traditional American political markers – liberal Democrat vs conservative Republican – also appear out of sync with the new reality revealed by Snowden, namely the existence of a secret surveillance programme believed to be illegal.

So, a Republican Party senator like Rand Paul, who supports the Tea Party’s seemingly-irrational agenda of constitutional literalism, is moved to defend Snowden after a fashion. Contrasting the former NSA contractor’s actions with those of James Clapper, director of National Intelligence, Senator Paul cautioned against precipitate judgment. “Mr Clapper lied in Congress in defiance of the law in the name of security.

Mr Snowden told the truth in the name of privacy… both of them broke the law, and history will have to determine,” he said.

But a relatively liberal Democrat senator like Dianne Feinstein dismisses Snowden as a “traitor”.

The jumbled political messages are of a piece with the confused questions America is asking in the aftermath of the storm triggered by Snowden. As one blogger says, more in sorrow than in anger, why does it make sense to Americans to ask, “What kind of person would defy authority in this way?” but not to ask “What kind of person helps the State conduct its business outside the scope of public deliberation and democratic authority, and does not seek to expose it?”

The dilemma is particularly acute for Americans. Despite all their talk of entitlement, the US constitution contains no express right to privacy. Meanwhile, the post-9/11 State has conflated counter-terrorism measures with what Snowden dolefully describes as a monumental attack on personal liberty, “an infrastructure that allows it to intercept almost everything… your emails or your wife’s phone… your emails, passwords, phone records, credit cards.”

His revelations go against the grain of a carefully preserved American ideal of personal liberty. For a century, US courts have repeatedly found a fundamental, if somewhat vague, right to privacy implicit in the constitution, going so far even as to protect an individual’s right to possess and view pornography. It is all based on the Bill of Rights, the collective name for the first 10 amendments to the US constitution. This limits the power of government and protects the privacy of citizens’ beliefs (First Amendment), privacy of the home against demands that it be used to house soldiers (Third Amendment), privacy of the person and possessions as against unreasonable searches (Fourth Amendment), the privilege against self-incrimination and thereby protection of personal information (Fifth Amendment). The Ninth Amendment adds that the “enumeration of certain rights” in the Bill of Rights “shall not be construed to deny or disparage other rights retained by the people”. This is elusive wording but it has been generally interpreted as justification for broadly reading the Bill of Rights to protect privacy in ways not specifically provided in the first eight amendments.

This has clearly been little protection against the surveillance State revealed by Snowden, which specifically violates the fourth Amendment by its capacity for – and inclination towards – unreasonable searches. All governments everywhere always claim such intrusions are within the law and for the public good.

But it is a moot point if James Madison, instrumental in the drafting of the constitution and author of the Bill of Rights, would have understood this 21st century argument. As he famously put it, the legitimacy of a government, to be administered by men over men, requires that “you must first enable the government to control the governed; and in the next place oblige it to control itself.”

Might Snowden have a place in history after all?