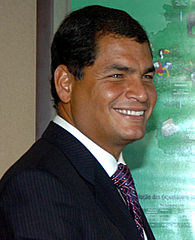 There’s more to Ecuador’s Rafael Correa than that wolfish grin.

Anyway, Mr Correa does not seem to restrict his interest to Ecuadorean publications.

Why else would today’s Washington Post editorial , dismissing Mr Correa as “the autocratic leader of a tiny, impoverished” country, upset the Ecuadorean President so much? The Post also accused Mr Correa of a double standard for welcoming Edward Snowden while allegedly stifling critics at home.

Mr Correa has been bristling on the twitterverse ever since, railing against media coverage of the Snowden saga  and slamming the world order as “not just unjust (but) immoral”.

The word wars over Mr Snowden have grown more intense in the 72 hours since he was last in motion around the world – as opposed to being stationary, and unseen, in the ‘transit lounge’ of Moscow’s Sheremetyevo airport.

It’s a fair guess that barring a spectacular of some sort in the next few days, Mr Snowden’s plight will steadily move down – and off – world news bulletins. Then, he will truly be in a limbo. One might argue that the oxygen of publicity has provided enormous protection.

A ‘new’ news story with historical resonance – perhaps the passing of the Mandela era? – would decisively knock Mr Snowden off the world’s radar (at least for a while). Sadly, this is looking increasingly likely with South African president Jacob Zuma cancelling a trip to Mozambique on account of Madiba’s critical condition.