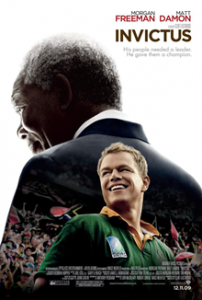 Nelson Mandela was Invictus. Unconquered by the terrible and destructive power of an unequal and humiliating past. As the 2009 film, starring Morgan Freeman and Matt Damon, showed, Mr Mandela was able to use a divisive sport to unite a fragmented nation; rugby motivated and willed his country to a more unified present. In so doing, he made South Africa truly free.

Mr Mandela’s idea of self-mastery came from ‘Invictus’, the poem by William Ernest Henley, who contracted tuberculosis at 14 and had a foot amputated at 17. Mr Mandela used to read the poem to himself in Robben Island prison.

Out of the night that covers me,
Black as the pit from pole to pole,
I thank whatever gods may be
For my unconquerable soul.

In the fell clutch of circumstance
I have not winced nor cried aloud.
Under the bludgeonings of chance
My head is bloody, but unbowed.

Beyond this place of wrath and tears
Looms but the Horror of the shade,
And yet the menace of the years
Finds and shall find me unafraid.

It matters not how strait the gate,
How charged with punishments the scroll,
I am the master of my fate:
I am the captain of my soul.

With all of this to think about, it is hard to understand the fuss over Mr Obama. Coincidence – and it is coincidental that President Obama is in South Africa at the very moment when Mr Mandela is fading – can be a strange thing. As South African president Jacob Zuma put it, these two men are “bound by history as the first black presidents of your respective countries.”

It’s hard to understand the minor brushfire some are trying to light about Mr Obama popping into Mr Mandela’s hospital room.

This is highly unlikely, utterly necessary, a complete non-story.

It is probably a manifestation of a particular point in the Mandela saga – this particular point, when he is 94 and revered in the way of almost no one else on the planet. He is old and critically ill and there is little to say about him other than how much everyone admires the man who transcended the past to embrace the future.

So, even before he passes, The Washington Post, writes, what is essentially an obit. It is beautifully articulated and clearly deeply felt. Richard Cohen says: “He was not a freedom fighter looking to continue the fight — a Yasser Arafat unable to put down his gun and take yes for an answer. Mandela was able to administer, to turn to politics, to plead for racial understanding and tolerance. More important, he embodies those qualities. He evened no scores, waged no vendettas, never made himself the cause and casts a shadow across the inner lives of all people.”