Yet again, a US president visits Robben Island. But much has changed

How much has changed in 15 years. Once again, an American president is in South Africa and once again, he is visiting Robben Island, eight miles off the coast of Cape Town. But this time it is without Nelson Mandela at his side. Mr Mandela lies gravely ill in hospital. Barack Obama had to go to Robben Island alone. 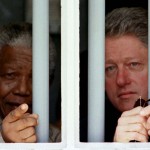 When Bill Clinton went to the prison where Mr Mandela spent 18 years for leading the anti-apartheid movement, he was accompanied by Robben Island’s most famous inhabitant. It was March 1998 and Mr Mandela was president. It had been just seven years since Robben Island had ceased to serve as a prison for members of South Africa’s black opposition, union organisers and militant activists.

With Mr Mandela by his side, Mr Clinton saw the tiny cell that was his prison for nearly two decades. He left it only to work at the limestone quarry – backbreaking work in blazing sunshine. His lungs were damaged, as were his eyes. When Mr Mandela was finally released from Robben Island, he had eye problems and tuberculosis.

And yet he was whole – because his soul was unaffected.