Nigella Lawson, 2013: How to be a divorced domestic goddess 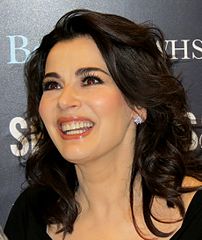 I owe it to a friend, who long ago gave me a copy of Nigella Lawson’s ‘How to Eat’ for Christmas, that I learnt not how to eat, but how to cook to eat with delicious abandon.

Nigella’s gooey chocolate puddings, bruschetta with day glo-bright pea puree, South Beach soup, roast chicken, ginger bread and butter pudding – all of these and other recipes have played starring roles in my domestic battles with the stove and the business of cooking and feeding and enjoying the process.

One can only wonder how the domestic goddess is dealing with the public humiliation to which she is now subject. To be summarily divorced by her millionaire art collector husband Charles Saatchi – and to apparently, learn of it from a newspaper – is the ultimate dismissal. Nigella has said nothing, publicly, about anything.

Her restraint is admirable. As Cristina Odone writes in The Daily Telegraph, “except Nigella Lawson won’t be destroyed… After all, this chef knows that revenge is a dish best served cold.”

Or that a substantial serving of one of those luscious puddings she has often suggested as the remedy for heartbreak and other horrendous private problems might be in order.