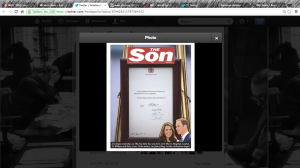 The Windsors are becoming like a continuously and magnificently updated episode of The Archers, the long-running British soap that is the most-listened-to non-news programme on BBC Radio 4 (and incidentally the world’s longest-running soap opera in any format.)

It says something about The Archers that what originally started (back in May 1950) as “an everyday story of country folk” has metamorphosed into a “contemporary drama in a rural setting”.

So too The Windsors, working overtime to pretend they’re “normal” and “ordinary” despite their millions and their prized real estate and many piles in the country and horses and art and titles.

Of course. There is nothing the British Royal Family can do but hoover up as much publicity as possible, but to do it so cannily, it seems to be playing hard to get.  Clarence House’s tweets, (@ClarenceHouse live-Tweeted the couple’s comments, according to Twitter UK today). They also provided Storify assistance to journalists writing about #RoyalBaby. Hardly an attempt to shut off the publicity taps; more like a way to keep the faucet judiciously open.

When I reported on these and other matters in London, I remember a remarkable press conference at Buckingham Palace. It was the first-of-its-kind (really) and all of us (including, if I remember right, the NYT’s exceedingly sharp and very courtly London correspondent Warren Hoge) turned up, curious to find out why it was happening. This was back in 2005, and there was not much reason to invite the world’s media down to Buck House and give them tea and biscuits except as a get-to-know-you and want-to-sway-you offensive. The House of Windsor had been buffeted by so much bad news and was so ground down by tittle-tattle, scandal and sordid stories that something needed to be done. Besides, Prince Charles was intent on marrying Camilla Parker-Bowles some time in the future and events needed to be managed in a way that ensured the UK would not respond with bile and the world would not see British Royalty as immoral and inconsequential in the way of, say, Monaco’s perma-tanned ruling family.

It’s a moot point though if there’s just a bit too much attitude.

Too much lese majeste perhaps.

On a scorchingly hot day in London, was it really necessary to make the media battalions wait an extra four hours while the new family “bonded”? To some, it might seem rather arrogant even though being nice to godawful reporters is not necessarily part of the HRH job description. That said, it displays common humanity. The human touch. That all of us are, in the end, kin.