Dear Beautiful World, writes Abercrombie & Fitch, even if you’re not

Dear Beautiful World (and we, here at Abercrombie & Fitch really do believe you’re beautiful, even when you’re not, or you’re fat, or you don’t really fit into, or suit our clothes)

We’re very sorry that we’re causing the French such trouble, so much so that they’re investigating us for employing beautiful men at our flagship store in Paris.

We’re sorry for several reasons, not least because being troubled can cause wrinkles. These are not generally regarded as beautiful, but please believe us when we say that we think they are, even if we don’t have employees who have them. 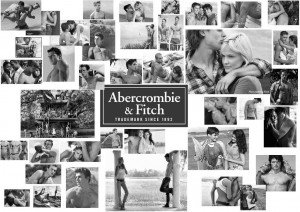 Anyway, one of the main reasons we’re sorry about the events unfolding in Paris, is that the allegations aren’t true. It’s true that we employ good-looking people but it’s not true that we wouldn’t employ anyone incapable of parading bare-chested through our stores.

Anyway, so we really do think that it’s a waste of time for the independent French watchdog, Defender of Rights, to investigate our employment practices for discriminatory tendencies. Next, they’ll be saying we should be selling ugly clothes in order to demonstrate that we are completely non-judgmental and value-free.

When we were founded in 1892 (okay, okay, we changed hands and we closed and we’re now a brand name that’s been bought and sold several times, but no less valuable for that) by David T. Abercrombie and Ezra H. Fitch, there was no doubt who we catered to. Our customers were those who fancied (and could afford) good quality, good-looking sporting and excursion goods. We sold expensive shotguns, fishing rods and tents. Should we apologize for being primarily focussed on rich customers? Should Louis Vuitton?

As a brand that has been selling to the world far longer than most – our first store beyond American shores opened in Beirut in 1894 – we know that nothing unites the planet more than the desire to look good.  (Though we really do believe that everyone looks good all the time, everywhere, even if they’re not sporting the clean, preppie look, or would not quite suit the preppie look.)

Anyway, whatever your bank balance, please at least believe us when we say we think you’re beautiful (even when you’re not, or you’re fat, or you don’t really fit into or suit our clothes).