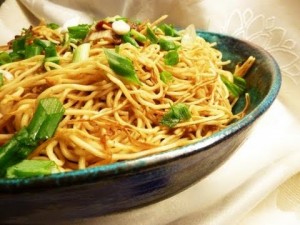 We did a bakmi (or bami) today, inspired by our neighbour’s excellent (and plentiful) signature dish of Surinamese noodles last night.

He’s promised to give us a lesson but till then, we did a taste approximation using Surinamese cuisine’s signature boiled soy sauce and brown sugar mix.

Bakmi literally means meat noodles and the Surinamese version appears to bear traces of all the different population strains that make up the country – Hindustani, Creole, Javanese, Chinese, Dutch, Jewish, Portuguese and Amerindian.

Being in Haiti, we used the hot local piman rather than the Surinamese Madame Jeanette.

Our bakmi/bami looked like the real thing. We’ll know for sure after our first Surinamese cooking lesson.