How unsafe is the US really? Measure threat by level of animosity 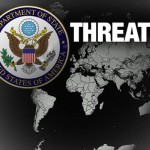 On International Quds Day, the United States issued an extraordinary global travel warning for Sunday. You have to wonder why it announced it would close 21 embassies and consulates across the Muslim world. Some say that the public notice belies its seriousness. If there were a real threat, wouldn’t they have kept quiet about it and worked behind the scenes to neutralize it? But others believe the State Department warning is a response to recent events, not least last year’s September 11 attack on a US diplomatic post in Benghazi, Libya.

It is ironic that the announcement came on International Quds Day, the last Friday of Ramadan, when people in Iran and some Arab countries express their solidarity with the Palestinians and their opposition to Israel. The remember-Jerusalem day was established by the late Ayatollah Khomeini and is a reminder of how far apart the US stands from those with it can neither make peace nor war.

Surely the animosity to the US – and its inability or unwillingness to do anything about it – is the biggest threat of all?