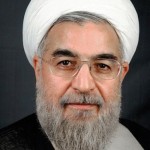 Iran’s new president is endorsed by the Supreme Leader today, preparatory to taking office tomorrow with representatives from 52 countries in attendance. Will there really be a change in the way Iran deals with the world?

Don’t expect too much, despite Hassan Rouhani’s Glasgow education and campaign promises of a different approach to foreign policy?

For all that he is considered a moderate, Mr Rouhani is a ‘moderate conservative’. He’s not about to start rolling back anything about the state of the nation – one in which he has successively held key positions.