Oh America. Certainly land of the brave. Still home of the free? 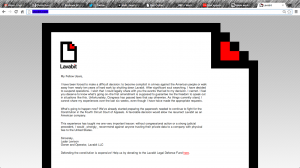 Imagine a large country known for its weapons systems, its ideological beliefs and its geopolitical strength.

Imagine someone falling foul of its government.

Imagine that someone being branded a traitor and seeking refuge in the country’s political and ideological antithesis.

Imagine the large country of the first sentence pursuing the ‘traitor’ with single-minded intensity.

Imagine it seeking to pry into the encrypted emails sent (and received?) by the ‘traitor’.

Imagine the owner of the encrypted email service refusing to cede ground and closing shop instead.

It might so easily be anywhere. Russia, China, the USA.

In this case it’s the US and its pursuit of Edward Snowden and his emails as he makes a new life for himself in Russia. So far, so expected. These are the games that governments play.

The chief casualty appears to be Ladar Levison, owner and operator of Lavabit LLC. He’s built up his business over 10 years and in tones of deep anguish, he hints at why he decided to shut it down rather than “become complicit in crimes against the American people”.

But it is his closing words that are particularly damning: “This experience has taught me one very important lesson: without congressional action or a strong judicial precedent, I would strongly recommend against anyone trusting their private data to a company with physical ties to the United States.”

Oh America. Certainly land of the brave. Still home of the free?