It takes hours to cook a biryani, just a few minutes to eat it all 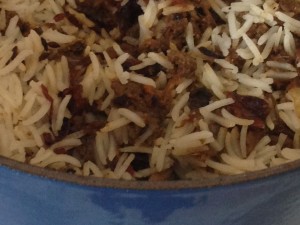 So we followed Confucian wisdom and ate at our own table as we would at that of a king.

It takes time – I estimate about two hours from start to finish – to cook a biryani, but just a few minutes to demolish a deep, nine-inch dish.

As someone who loves rice in any form – risotto, paella, arroz con pollo,  kedgeree, nasi goreng and now that I am in Haiti, diri ak jonjon and diri ak pwa – I wonder if there’s any purchase in comparing.

Smell a biryani and there’s the answer. It elevates the grain to its most sublime avatar.

Hard to believe it was created by the Mughal rulers as a plebian necessity. Being a filling, one-pot dish, it was easier to feed the army biryani than rotis or paranthas.

It has, of course, evolved.

The Calcutta biryani, with potatoes, is an interesting one-pot saga of straitened times. Legend has it that it emerged from the Lucknow style but circumstances made it more humble by far. When Wajid Ali Shah, the last nawab of Awadh, was exiled to Kolkata, he was unable to live in quite the style to which he was accustomed and his chef was forced to use potatoes instead of meat.

And then there are all the biryanis outside India. The Karachi beef; danpauk from Burma; Iran’s berian polo and Malaysia and Singapore’s biryani bukhara, among others.

Consider the variety within some of the Indian categories. The Nizam of Hyderabad’s kitchen had 49 varieties.

A staggering number of biryanis some might say. But one can never have too much of a good thing.