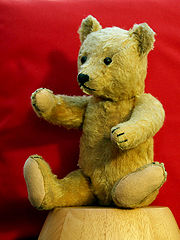 Calling all arctophiles (arktos is Greek for bear) to this, the ultimate guide to how much the world wanted the teddy bear to enter the 21st century, surfing the internet and chatting amiably away to children of any age (from 8 to 80).

The Supertoy Teddy venture, which creates a stuffed creature that will take about a range of subjects with the help of a smart phone, has exceeded its £30,000 goal and there are still 10 days to go. Obviously, the 963 backers (one of whom is the enthusiastic self-confessed arctophile Stephen Fry) who put up £54,332 are entranced by the prospect of having a chatterbox teddy yammering away, come Christmas time.

If there are unmistakable similarities to Siri, the intelligent personal assistant that speaks through the iPhone5. And that’s right down to the inability to answer questions very cleverly (but Supertoy Teddy is still being developed so there’s some chance it might magically develop a real aptitude for conversation).

Be that as it may, the new toy is an exceedingly clever idea and one can only wonder why no one executed it more than a hundred years after the teddy’s bear (as it was originally called) was born. A Washington Post cartoon captured US President Theodore (Teddy) Roosevelt’s distaste at being asked to shoot dead a bear on a hunting trip and an enterprising toy-maker brought the cartoon to life. (He very properly sent one of the little furry animals to the President seeking permission to use his name). That was 1902.

Teddy’s bear was due an upgrade with a smartphone acting as its brawn and the internet server its brain.