A drop of Chinese blood, or more, in North Korea’s new mobile phone? 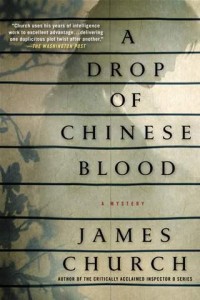 Those who like new-fangled detective stories, or at least those set in new, unmined locations, will know that ‘A drop of Chinese blood’ is the title of the latest in the Inspector O series.

Those who have read any or all of the five books will know they are written by someone who knows North Korea well. In actual fact, it is a CIA officer who writes under the pseudonym James Church. He has been in and out of the isolated country at least 30 times.

Those who like oddball investigators with integrity will know that Inspector O is a grandson of one of the Heroes of the Revolution and a police officer who profoundly dislikes politics, bureaucratic twaddle and mobile phones (mostly because he is unable to change the silly ringtone on his government-issue instrument).

So what would Inspector O have made of his country’s new, supposedly homegrown Arirang smartphone? It was shown to Kim Jong-un during a factory factor and the supreme leader commended its “high pixels”. A sceptical world meanwhile said it was unlikely to be Made in North Korea and probably had Chinese characteristics.

Some weeks ago, Inspector O’s creator said of the able policeman in a slightly different context, “Inspector O doesn’t like politics. He would wonder how it will upset his routine? How difficult will it make it for him to get a cup of tea?”

Might the introduction of the Arirang smartphone make life more difficult for North Koreans?

Possibly. The instrument will be yet another reminder of what they cannot have – conversation inter and intra-nationally.

Mr Church was speaking in April, at the height of North Korea’s bellicose threats of nuclear strikes against South Korea and the US. At the time, he explained the heated rhetoric as a manifestation of the regime’s insecurity because “North Korea is terrified of being swept away, of ending up on the wrong side of history. The regime knows that… for a poor, weak piece of mountainous real estate like the Democratic People’s Republic of Korea, nothing is better than keeping everyone else off balance and royally annoyed.”

They succeed. Every time.