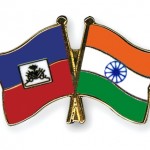 So a Bangalore company, VayuGrid, has signed an agreement with Haiti’s Sonamar SA to develop bio-energy zones here.

Not knowing exactly what these zones are, I can only quote the news story I read: “These bio-energy zones will produce renewable energy through elite biofuel trees developed by VayuGrid and deliver a triple net social, environmental, and economic benefit to Haiti.”

They’re promising wonders. The zones will be established on 1,000 acres of land that cannot be farmed. The energy produced will be as follows: 1.2 million gallons of biodiesel per year; 15,000 tonnes of green coal and unquantified amounts of high-protein feed for animals. There will be jobs and economic opportunities aplenty. The initial project will be for 1,000 acres, expanding 20 times by 2017. 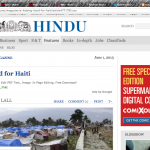 India, as I wrote in my article for The Hindu, engages with Haiti in many small but significant ways. But one bit of thankful de-linking as Mint reported on Friday, August 23: “The UN aviation watchdog, which had ranked India among 13 nations (including Haiti) with the worst record for air safety oversight, may remove the country from its blacklist after a week-long compliance audit of the Indian aviation regulator…”