Someone prank-called the NSA,asking if he could get back a deleted email 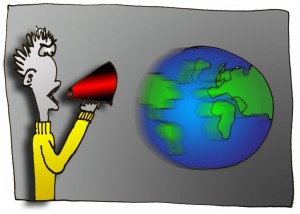 So here’s one of the funniest jokes to emerge from the Snowden affair.

“Someone prank-called the NSA, asking if he could get back a deleted email.”

​That’s according to Truthloader and it’s causing gales of laughter on g+. And Youtube. And just about everywhere else you can imagine.

For those who do not know, Truthloader’s motto is “challenge everything” and it is, in its own words, “a daily YouTube show bringing investigative and citizen journalism together.”

This isn’t as revolutionary as it sounds. Back in 2007, Professor Mary-Rose Papandrea, a constitutional law professor at Boston College, was writing about how citizen journalism was an old idea using really new technology. “]n many ways,” she wrote, “the definition of ‘journalist’  has now come full circle. When the First Amendment of the U.S. Constitution was adopted, “freedom of the press” referred quite literally to the freedom to publish using a printing press, rather than the freedom of organized entities engaged in the publishing business.”

More to the point though, Truthloader is a remarkably irreverent, young and freshfaced product from that old broadcasting warhorse ITN Productions. Last year, it announced that it would produce the Truthloader channel, showcasing “the work of citizen journalists from all around the world with original daily programming from amateur eyewitnesses and passionate online campaigners.”

As also clearly, people with a jolly good sense of humour.