Happy 170th, The Economist, liberal to a fault except for ignorance 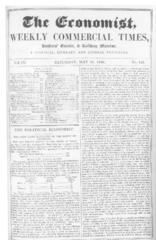 Yesterday was a notable birthday. The Economist marked 170 years of taking part in “a severe contest between intelligence, which presses forward, and an unworthy, timid ignorance obstructing our progress”.

As it said, in its typically understated way, the front page article of its first issue, considered Britain’s expiring commercial treaty with the Brazilian Empire and argued that “The present unsettled state of our [British] commercial relations with the Brazilian Empire presents a subject of more importance than any other at this moment to our trading, and, we may add, to our social existence”.

It has spent the best part of nearly two centuries arguing in much the same vein. I may be a bit biased but there is much to be said for that.

Even so, the reason it was founded – as well as its editorial stance – might give pause for thought to those who cry foul today when business interests buy, own and run a publication in pursuit of certain interests. British businessman and banker James Wilson started The Economist to advance a very specific cause – the repeal of the Corn Laws, a system of import tariffs. And it has remained largely supportive of the very principle that brought it into being – economic liberalism, with all the attendant notions of free trade, globalisation and free immigration.

In some ways, there may be some moral justification for using the news to argue for your point of view. In the philosophical belief that this idea and that course of action represents the best way to achieve the common good. T’was well said that “self-interest is the mainspring of human nature”.