In a stew: Can Chinese chicken pass the American taste test? 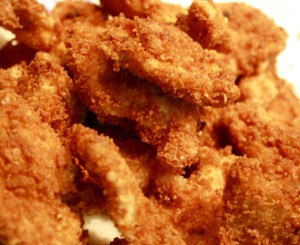 “Here’s a bit of news that might make you drop that chicken nugget midbite,” starts the NPR blog that has scared me within an inch of my Campbell soup-opening life.

Okay, I made that up. I haven’t opened a can of Campbell’s chicken soup in years. (Mostly because I’m the sort of boring, obsessive person who saves a carcass and makes stock. And freezes it.)

So I’m not worried about Campbell’s chicken soup but I am increasingly disinclined to eat a chicken nugget in the States now that the US Department of Agriculture has ended its ban on processed chicken imports from China. They can be sold in the US without a country-of-origin label.

Apparently just four processing plants in China will initially be able to export cooked chicken products to the US and those products have to be from birds raised in north America. But the future is aflutter with all sorts of possibilities, some of them worrying.

Scaremongering aside, it’s true there have been several food safety failures reported from China in recent years. The NPR blog lists dead pigs by the thousands in Shanghai’s waters, rat meat masquerading as mutton and the outbreak of the H7N9 bird flu among fowl on sale.

Will America be scared enough to lose its taste for chicken?

Hard to imagine. Back in 2005, the National Chicken Council was reporting that the average American family of four would be putting more than 200 pounds of chicken in the grocery cart in the year, up from 145 in 1990. The demand for chicken has continued to grow especially with the fad for low-carb diets.

Chinese or not, chicken passes the taste test. For now.