A toast to tonight? Can Angela Merkel complete her unfinished business? 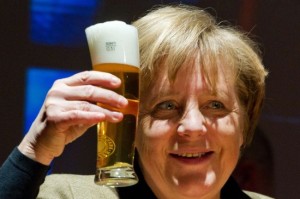 Stefan Kornelius, her biographers, is very sure she would not have been a great success in Italian politics. Mr Kornelius, foreign editor of the Süddeutsche Zeitung, whose biography of Merkel, The Chancellor and Her World, was published on Saturday, says she still remains a conundrum to many Germans but she is very German – she works a lot, is unpretentious, rather silent and has a decided distaste for high drama. She maintains a small flat in Berlin, another house elsewhere and has her own personal car. Germans have clinked glasses to that twice before.

The election result will  hardly be a great surprise. On Monday, September 16, Charlemagne was asking from Munich, “What did last Sunday mean for next Sunday?” The reference to “last Sunday” was the September 15 Bavarian state parliament election. More crucial though was the question about next Sunday, today, September 22, when Germans vote in the federal election for the Bundestag.

And this is what it seems to mean:

Federal election night looks good for Angela Merkel and her center-right Christian Democratic Union and her Bavarian sister party, the Christian Social Union, making it all but certain that Germany’s Iron Lady will be on the European and world stage till 2017.

The liberal Free Democrats did rather badly in Bavaria and could get the token sympathy vote most Germans reserve for politics’ metaphorical sandal-wearing muesli-eaters and Mrs Merkel would be able to continue her coalition in the Bundestag as before – ie the CDU, CSU and FDP making for a majority of seats

In many ways, Mrs Merkel’s untroubled continuance in office can only be good. She is plainspoken enough to go beyond the platitude. Remember her Honest Jane approach to the guest workers? “At the beginning of the 60’s our country called the foreign workers to come to Germany and now they live in our country. We kidded ourselves a while, we said: ‘They won’t stay, sometime they will be gone.’ But this isn’t reality.”

And then Germany’s Christian ethic: “We feel bound to the Christian image of humanity – that is what defines us. Those who do not accept this are in the wrong place here.”

Bored by Ms Merkel or not, she’s real.