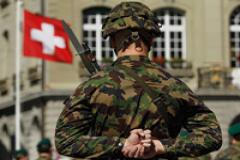 Haiti’s Prime Minister was recently in Europe, but not in Switzerland, else he might have learned a few inventive new reasons to justify having an army.

Just yesterday, a Swiss referendum voted to keep compulsory military service. Older voters apparently believe that conscription is one of the best ways to defend their famously neutral country.

This, despite the high costs of maintaining the Swiss Army and much muttering among the young that it’s a rank waste of time to serve in it especially as Switzerland was last invaded in the early 19th century. (But no one seems to say too much about the gender inequality that is a part of Swiss military service – for women, it is voluntary; but all men aged 18 to 34 must serve unless they’re conscientious objectors who can perform non-military service instead. Men who do not serve at all must resign themselves to paying an additional four per cent tax from their salary.)

The majority of the Swiss appear to regard their army as part of the glue that holds their nation together. Ueli Maurer, the defence minister, says to abolish military service would be to “break the genuine link uniting the people and the army.”

I suppose you can be neutral and unarmed but  perhaps it’s easier to be neutral if you can wave a big stick while you say nothing?