In Bill Bryson Week, time to ponder master of the curveball sentence 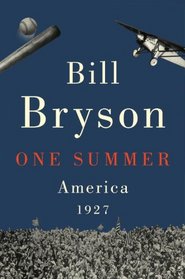 As happens every so often (roughly about once every three years) this is Bill Bryson Week. It’s a time when he is on the radio, on TV and at book signings and his new offering is being reviewed by the ‘quality’ press.

It is a time when yet again, the world gets to wonder at the “classic Bill Bryson sentence (which) flies like a curveball, never landing quite where you’d expect”. That’s how Erica Wagner put it in her review in the Financial Times.

I will, as I always have, get the new Bill Bryson, which rejoices in the rather odd title ‘One Summer: America 1927’.

There’s good reason. Anyone who loves words has to be amused by Mr Bryson’s turn of phrase. For all his ribbing of the English, his sense of humour really is quintessentially English. With an American roll.

That said, it’s hard to be sure ‘One Summer’ won’t be a bit like ‘At Home’, which was described described as a journey around the domestic empire each one of us rules over but was (as I put in my review for The Sunday Times of India back in May 2010) “an overlong account of almost any idea that might possibly have entered Bryson’s head.”

It was a short history of everything but the title of the book, dashing exhaustingly and madly across continents and centuries.

‘One Summer’ is 560 pages and it was worrying to hear Mr Bryson tell the World Service that it was really a collection of stories from 1927, not a significant year in American life by any means, but good enough to spin a yarn.

As always, he must’ve done so with verve and wit. But focus? ‘At Home’ was not a good example.