Karma and American TV: Is it good that ‘Bad’ things are ending? 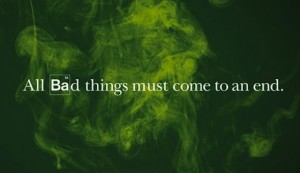 I hate to confess this, but I’ve never watched ‘Breaking Bad’. Ever.

(Part of the reason is we’re constantly in and out of the US, not really living there for very long at all, at any one point of time. This peripatetic existence means there’s less of a chance to get attached to settled routines, like the morning paper, a favourite TV show, the apple tree’s progress and so on. The other, possibly more fuddy duddy reason is that we don’t watch much television. Instead, we listen to the radio and read.)

Anyway, so I’ve never watched ‘Breaking Bad’ but am devastated that it’s ending today. So much so that I plan to acquire all five seasons and educate myself on what Schumpeter in The Economist describes as “one of the best studies available of the dynamics of modern business.”

In his own fuddy duddyish way, he adds. “a Harvard MBA will set you back $90,000 (plus two years’ lost income). You can buy a deluxe edition of all five seasons of “Breaking Bad”, complete with a plastic money barrel, for $209.99, or a regular edition for less than $80.”

I’ll be forking out $80. It seems quite remarkable that American television, which is so often derided, has been able to come up with a show that unites reality and the American Dream  to raise fascinating questions about good and bad, the moral consequences of doing wrong for possibly the right reasons.

What the show’s creator Vince Gilligan once described as the philosophy that “actions have consequences…karma kicks in at some point”.

Actually, that’s a very Hindu point of view. We were raised on exactly this notion.

As everyone but me knows from watching, ‘Breaking Bad’ plays out in recession-hit America where inequality is widening and the white-collar middleclass needs two jobs just to get by. The show’s main protagonist, Walter White, is a high-school chemistry teacher who also works in a car wash. When he is diagnosed with cancer, he decides to go into the lucrative methamphetamine business to pay for treatment and leave his family some money.

The Economist discerns the following business lessons in the show:

– Businesses flourish if there is huge ambition; product obsession and the right partnerships and alliances.

– Businesses are destroyed if partnerships fall apart, if there’s no work-life balance, if ego, greed and paranoia take over, the business leader starts to feel invulnerable and the more wealth he accumulates, the more he wants.

Lessons, of course, are all very well. It’s a fair bet that everyone’s been hooked on the drama.