India-Pak war of words: Allegory is allusive but it’s easy to decode

Sunday’s kerfuffle about the Pakistani prime minister’s allegedly derisive remark about his Indian counterpart illustrates the problem with political allegory.

It’s easy to misjudge its force. It may be allusive but it can be very simple to understand. That’s what gives it power. And meaning. 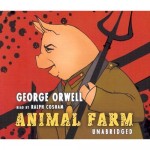 talking allegory of the order of ‘Animal Farm’, the brilliant satirical fairy story for adults about how the people’s revolution can be undermined by corrupt leaders.

The current row is about whether or not Pakistan’s Nawaz Sharif described India’s Manmohan Singh as a “dehati aurat” or a village woman in an off-the-record chat with two journalists, Hamid Mir of Pakistan’s Geo TV and Barkha Dutt of India’s NDTV.

Mr Mir appears to have set off the controversy by indicating that Mr Sharif seemed to think Manmohan Singh had behaved like a village woman by criticising Pakistan to Barack Obama. Ms Dutt challenged Mr Mir’s claim and now, he too has confusingly said he was misquoted. Her account is here.

Meanwhile, in India, the BJP’s prime minister-in-waiting, Narendra Modi, has draped himself in the flag and expressed outrage at the insult to his prime minister.

It might be good politics if it were not quite so theatrical.

Which brings one to the alleged original remarks. Could Mr Sharif really have said Manmohan Singh behaved like a village woman?

No. But he probably meant it. Consider this.

According to the Hindustan Times, Ms Dutt has tweeted to say that Mr Sharif “told an allegorical tale about a dispute between two villagers, one of them a woman. The story ended with how fights should be settled. Sharif’s account was all about how disputes should not involve third parties.”

It sounds like Pakistan’s prime minister didn’t call his Indian counterpart a village woman; he merely discerned similarities in behaviour.

The power of allegory lies in the way it allows the representation of an abstract idea or principle using a simple figure or event.

Perhaps Mr Sharif may not have realized the extent to which allegory is his forte?