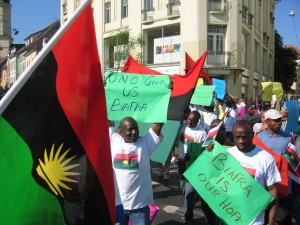 Nigeria faces massive security challenges, particularly from Islamist extremists in the north, but many believe that it’s problems lie in the lessons it failed to learn from the Biafran war.

Three words – injustice, inequality and unfair play – are said to be the trigger for that long-ago civil war as well as the continuing rebellion in the north and the militancy in the Niger Delta.

The Biafran army, or what remains of the military force that kept plucky but doomed Biafra going for three short years during the civil war from 1967, would probably agree. It wants back pay and everything else. They’ve been protesting about the unrealized promise made by then President Olusegun Obasanjo in 2000 that all the military that fought for the breakaway state of Biafra be treated as retired, not dismissed.

When I read this piece in Vanguard, one of Nigeria’s leading papers, I remembered that Haiti was one of just five countries that formally recognized Biafra. (The others were Gabon, Côte d’Ivoire,Tanzania and Zambia.)

More than 40 years on, there is dim circle of light from that half of a yellow sun, which was on the Biafran flag and is the eponymous title of the story so movingly told by Chimamanda Ngozi Adichie.

So much resulted from it.

Medecins Sans Frontieres came out Biafra’s woes with Bernard Kouchner seeing the effects of the Nigerian army’s blockade on the starving, secessionist Biafrans. At the time he was with the Red Cross and it was only when he returned to France that Dr Kouchner criticised it for being overly neutral, almost callous. He focussed the world’s attention on Biafra and decided that there was need for a new aid organisation that would look be preoccupied with the victims of conflict rather than the politics of it.