The CanAmerican Dream? Why the neighbours should cancel border and merge 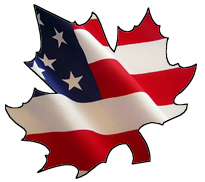 Diane Francis is CanAmerican (a dual-national Canadian American). She is also a journalist, writer and thinker. She has written a book that suggests a merger between Canada and America for the simple reason that it “makes good business sense.”

A Foreign Policy piece on her big idea makes for fascinating reading. At a time of much economic change and uncertainty, she says that merger would give the US access to roughly 13 per cent of the world’s remaining undiscovered oil reserves and 30 per cent of its undiscovered natural gas. And it would mean American infrastructural investment in Canada’s far north, which can only be a good thing. Ms Francis’s suggests “thought experiment” is undoubtedly interesting in these dark days of US federal government #shutdown and all the talk of debt default. She calls it a new sort of Marshall Plan. (If anything, perhaps a ‘Thurgood Marshall Plan’, a very American story of dreams and reality for Thurgood Marshall, the US Supreme Court’s first African-American justice.)

She’s not clear about what form such a United States of North America would take and is open to different configurations. Would it be a straightforward buy-out? A commonwealth? A federal union (like Germany), a council (Swiss), a coordinating government (the European Union)?

The name for the “merger of the century”, would also depend on its form and substance and as a Canadian who is also American, Ms Francis doesn’t suggest CanAmerica. Foreign Policy says it sounds too much like a question but some might judge it to have just the right ring for so pro-active an exercise in inventiveness.