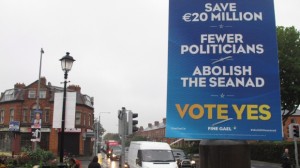 The Irish prime minister might be forgiven for bitterly mumbling Yeats’ lament under his breath: The best lack all conviction, while the worst are full of passionate intensity.

Yeats was a member of Ireland’s upper house of parliament, the Seanad, which Prime Minister Enda Kenny had personally campaigned to eliminate.

In Friday’s referendum, the voters said no. It is a rejection Mr Kenny has described as a “wallop”.

The results, which came in on Saturday, October 5,  are intriguing. For, the referendum was premised on what Everyman, everywhere, might regard as a bargain: fewer politicians and an enormous cut in expenses.

But the Irish didn’t seem to want that. The debate was framed as a vote for “fewer politicians” and a 20-million-euro trimming of expenses. But some might be confused about how abolishing the senate would mean fewer politicians when it was criticized for being undemocratic and  politically toothless, ie was not political at all.

What’s clear is that Irish voters seem to have repulsed the idea that trimming expenses should result in less talky-talk about the affairs of the nation; fewer checks and balances; less oversight.

On balance, it’s probably the way Everyman might feel. Politicians may be reviled but they’re still considered necessary to the way we live – and govern ourselves.