Commonwealth conundrum: Ok to be on margins, just not irrelevant? 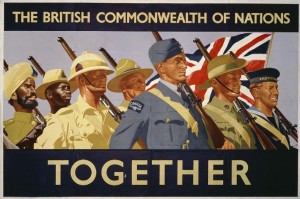 The Commonwealth (of 52 former British colonies and Mozambique and Rwanda) sent out a press release saying its finance ministers are meeting in Washington DC today, “on the margins” of the 2013 International Monetary Fund and World Bank annual sessions. TMI? Too much information? I’m not sure if the words “on the margins” are an edifying choice, considering The Gambia has just departed the voluntary association and Commonwealth aficionados fear it is on the verge of marginalization to the point of utter irrelevance.

Some might say that’s a tautology, for doesn’t marginalization mean irrelevance? Not always, is the short answer. And the Commonwealth is a case in point. It has a very small budget (less than one per cent of Britain’s Department for International Development) and is run by fewer people than work in the café at UN headquarters. Zimbabwe has withdrawn from the organization and the Fiji doesn’t seem to care it has been suspended.

As Robert Colvile pointed out in his excellent blog for The Daily Telegraph last week, the Commonwealth “has still not quite found a role on the world stage”. But it still has takers and some of the attraction is the prospect of trousering a bit of cash now and then. The Commonwealth’s members, he writes, “value the bonds that the organisation forges between them, and the chance to chat to the Queen every couple of years…” Some, like The Gambia’s President Yahya Jammeh use the Commonwealth to beat up the British, because it’s rather a convenient “forum to castigate Britain for “unwarranted colonial interference (or for) neglecting its responsibilities to the former colonies.” Robert Mugabel, says Mr Colvile, is particularly good at both complaints, at the same time.

His views should be taken seriously. He did a masters thesis on the role of the modern Commonwealth and seems willing to use his sense of humour to show up the reality of President Jammeh, described by one well-informed source as “an ocean-going, grade A nutter”.

To that extent The Gambia’s flouncing out is not really the beginning of the end.

Even so, it is hard to see the Commonwealth becoming more vibrant, more needed even if, as Mr Colvile suggests, India gradually took the reins from Britain, or at least shared the leadership role so that business could be done “unencumbered by white-man guilt”.

What business? That’s the question. Sadly, it must be asked, even for an organization that represents one-third of the planet.