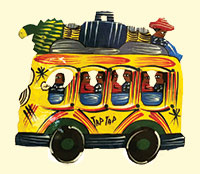 I’ve seen enough of Africa’s matatus to compare and I can honestly say they’re not a patch on Haiti’s tap taps. Often enough, the Haitian public taxi is a piece of moving art; even when dusty and dented, it is still an artist’s reflections in metal. Which is why this cracking idea – free wi-fi in the matatu – would probably be a runaway success in Haiti, as well as giving the tap tap a greater sense of self-consequence.

Some might say it would be madness to enable the tap tap driver to build on his strongly etched master-of-the-universe air. The cry goes up, ‘they are willing to take on man, beast or machine (kreyol for vehicle) as it is. What would they do if they felt still more elevated?’

The answer might be surprising. Complimentary wi-fi and the host of other services now being provided by 1000 matatus in Nairobi, might actually soften tap tap behavior. If they started to luxuriate in their reputation – competing to offer, as in Nairobi, location-based  advertising; electronic boards that carry the headlines, discussion topics, games and adverts, and suchlike – the tap tap experience is sure to change. For the better.

Admittedly, it is a stretch of the imagination to transplate the new improved matatu to Port au Prince. The free wi-fi is offered through a service called Vuma Online, which was launched this April by Safaricom, Kenya’s biggest telecom company.  And Nairobi, as the BBC points out, is East Africa’s economic, business and technology hub.  Port au Prince cannot compare except in terms of congested roads.

Nairobi’s lengthy traffic jams (which double or treble commuting times) made the new matatu infinitely desirable. It might be an idea whose time has come for Port au Prince, Haiti.