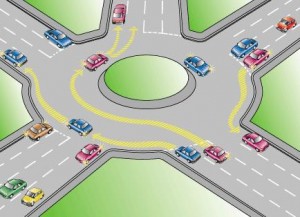 Paying homage to that admirable British invention, the roundabout, The Economist points out that it “tend(s) to work only when motorists observe the British virtues of fair play and stick to the rules.”

The roundabout requires drivers to collaborate, demonstrate generosity and respect for others, to be tolerant, good-humored and generally British to a fault.

When the conditions are not right, the result is chaos. The newspaper points to Nairobi’s appalling experience of roundabouts, but in fact one could do worse than look to Delhi or any other megapolis aspiring to the status of world capital.

Another popular British export that needs British sense and sensibilities, says The Economist, is parliamentary democracy. Jawaharlal Nehru, the first prime minister of independent India, was well aware of this and he began parliamentary government as he meant to go on. He famously treated the institution with great care, punctiliously followed parliamentary etiquette in much the way of the House of Commons in London. But subsequent generations of Indian politicians (and indeed in many other former British colonies, not least in the Caribbean) have been hardly as bound by tradition. One could argue these parliamentary governments chose brilliance over dullness.

For, as Walter Bagehot, the businessman who went on become editor-in-chief of The Economist (founded by his father-in-law) said, dullness in matters of government is a good sign…in particular, dullness in parliamentary government is a test of its excellence, an indication of its success.