The feast of the goat: Eid for a Christian country like the Dominican Republic? 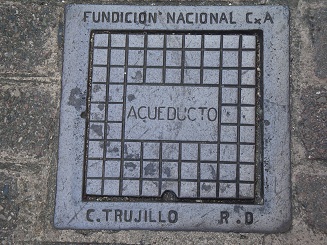 The Dominican Republic’s flag bears a Bible but the fanciful, the ignorant, or those with a heightened awareness of Islam, might say the country twins with Muslim ones in a very particular way – everywhere, there is reference to the feast of the goat, suggesting an eid sacrifice.

It isn’t eid at all, of course, just a reference to the May 1961 assassination of the DR’s brutal dictator Rafael Trujillo.

Standing in Santo Domingo’s Ciudad Colonial, once Ciudad Trujillo, it is hard to erase the memory of the iron General’s impact on his country. Manhole covers still bear his name; the National Pantheon is the way it is today because that’s where he planned to be buried and he was the one who led the DR’s economic growth and built hospitals, schools, roads and harbours. He still lives in the national memory – in all sorts of ways. A nightmare. A waking dream.

“I don’t believe in the church, I just believe in God,” one Dominican told us, as we stood in front of the Cardinal’s enormous house, just off the central plaza. “Trujillo did a deal with the Pope and ever since, the cardinal is always an army general. Can you believe that?”

I could. That was because of ‘The Feast of the Goat’, Mario Vargas Llosa’s brilliant novel, which captures the vulgarity, showiness, falsity, corruption and casual cruelty of Trujillo and his cronies . The book’s title is taken from the popular Dominican merengue song, ‘Mataron al chivo’, meaning “they killed the goat”.

The words, referring to the fateful events of that day in 1961, when Trujillo was killed and a 31-year-era ended, are quoted at the beginning of the book. Vargas Llosa said it was a novel, not a history book, and he “took many, many liberties.” But he also insisted he “respected the basic facts…and I have not exaggerated.” If so, it paints so appalling a portrait of a psychologically wounded society, the feast of the goat had to have been the biggest party in the Americas.