From world music to world food: Would that be the sandwich? Absolutely 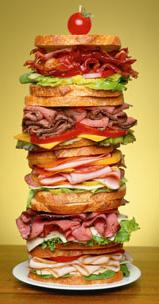 After the rant about world music, let’s talk world food. A kedgeree sort of rice dish? Sauted potatoes? Both are to be found pretty much everywhere. But I think Helen Graves has got it pretty much right in The Guardian. The sandwich (for all that it was invented in the UK) really is a world food.

Ms Graves should know. She says she’s been blogging about sandwiches for a year, which seems to suggest a sort of single-minded dedication you can’t really sandwich between a passing fancy and a sudden fad. She has also searched out the 101 best sandwiches known to man (woman or child) for a book cleverly titled ‘101 sandwiches’. and she has lots to say about the “Vietnamese banh mi, the Sicilian-American muffaletta, the British shooter’s – and the less well-known, the sandwiches that really need shouting about – the spiced Indian vada pav, the Portugese franceshina (it has beer sauce), and the Tunisian fricassee.”

For reasons of space, she regretfully had to leave out the “pambazo, a Mexican stunner that involves bread drowned in guajillo pepper sauce and a filling of potatoes and chorizo” and  “the American ‘football sandwich’ – a kinky little ham number, covered in a sauce made with melted butter, poppy seeds and mustard.”

She doesn’t say anything about an Eskimo sandwich (do they have one?) but she seems to have pretty much eaten her way around the food that built the planet – sandwiches.