Vanity, Versailles of the Caribbean & Voltaire’s take on the equality of man 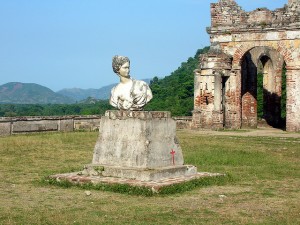 Atlas Obscura, a new travel blog that styles itself “the definitive guide to the world’s wondrous and curious places”, has written an evocative piece about San Souci, the palace of the Haitian slave who helped free his brothers and went on to name himself emperor.

Paired with a set of haunting photographs, it describes how King Henri Christophe I ordered the building of his own Versailles, working the labourers to death as they slaved over the palatial building from 1810 to 1813. He wanted nothing but the best, a bustling and elegant backdrop for his newly acquired imperial grandeur, which extended to the class of nobles he created and his son, Jacques-Victor Henry, who was designated prince and heir to the throne. Accordingly, San Souci had extensive gardens, artificial springs and a waterworks system and it acquired “the reputation of having been one of the most magnificent edifices of the West Indies”.

There’s nothing new about any of this of course. Anyone interested in Haiti’s extraordinarily brave revolution would know something about its extraordinarily tragic inability to transcend its past. Even those who do not know will know that the Versailles of the Caribbean, built in an extreme slave colony, could hardly be what it’s French name means: carefree, san souci. Instead, it symbolized a deepening discontent within the newly independent black slave republic. This was not just because King Henri Christophe was autocratic, ruthless and cruel to the people he had helped free. It was because he re-imposed slavery on his people in an act of extreme egotism.

As Professor Jeremy Popkin of the University of Kentucky has written, the newly independent Haiti pursued its own destiny much as its colonial masters had decreed. General Toussaint Louverture left “a troubled legacy …(of a) very inegalitarian society… based on rule by a military caste.” So much so that he actually justified his diktat on forced labour citing the “bad example” set by “labourers of both sexes (who) spend their time in wandering about…”

As Voltaire said, all men are equal; it is not birth but virtue that makes the difference. Anywhere in the world.