How do you rate crunch time for Captain Phillips, the film, the man? 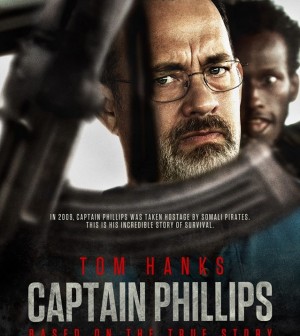 Everyone says that January, when the Oscar nominations will be announced, will be crunch time for ‘Captain Phillips’, the film.

Some say that December, when the lawsuit filed by the crew of Maersk Alabama against the shipping company goes on trial, will be crunch time for Captain Phillips, the man .

Having just watched the film and heard interviews with the real Captain Phillips, I would say that crunch time started when the movie went into theatres, transfixing audiences with its portrayal of the 2009 high seas kidnapping by pirates off the Horn of Africa.

The Maersk Alabama’s Captain Richard Phillips was taken hostage and spent four days in a sweltering lifeboat with his increasingly savage and frustrated captors. After his rescue by US Navy SEALS, the Captain went home to Vermont, took time off to recover. help someone write a book for him, returned to the sea and gave his blessings to the film. The result is Tom Hanks doing what he does best – portraying a decent man caught out by fate and striving to retain his inherent humanity.

In real terms, the best way to appreciate Captain Phillips, the film, is to listen to these interviews (the relevant bits are in the second part of the whole programme):

Tom Hanks on playing living people like Captain Philiips and the actor’s responsibility to be as accurate as possible about that intangible thing, the emotional landscape (he also talks intriguingly about growing old on camera and how difficult it is to play, say a 42-year-old any more):

Barkhad Ali, former limo chauffeur who plays lead Somali pirate onscreen on whether he minded his homeland being portrayed as a desperate basket case:

Side by side, it might be instructive to look at the US Navy’s focus on the incidents revolving around Captain Phillips and the Maersk Alabama. The Navy seems greatly (and rightly?) proud of the way piracy has been tackled in the aftermath of the April 2009 pirate attack. The global attempt to tamp down on piracy off the Somali Basin has had very real effect – in 2012, there were just 32 incidents in that area, down from 166 in 2011; 182 in 2010 and 181 in 2009. Today, the pirate badlands is southeast Asia.

More to the point is this account of what happened to another Maersk vessel in the Somali Basin, barely six months after the Captain Phillips kidnapping. As documented, four suspected pirates came within 300 yards of the ship but a “security team …responded to the attack by using evasive maneuvers, Long-Range Acoustic Devices (LRADs) and small arms fire, causing the suspected pirates to break off their attack.”

So, merchant ships got security detail. April 2009 was crunch time for the merchant marine industry.