By 2030, Jack The Ripper will be gruesome but no longer a mystery 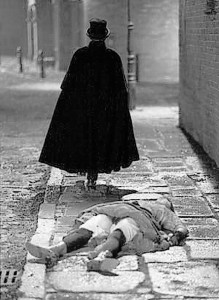 Series four of ITV’s ‘Whitechapel’ launched some weeks ago and it’s astonishing to note the remarkably high levels of continuing interest in Jack the Ripper who sliced his way through Whitechapel’s whores in 1888.

It’s not the killing spree. There have been many more gruesome since.

It’s probably the enduring mystery. The classic whodunnit because The Ripper was never caught, or at least, never knowingly captured. After a killing spree consisting of five terrifying murders, he seemed to melt away and no one knows who he was, why he did what he did, and why he stopped so abruptly.

The curious might be rewarded by a further 15-year wait for a conclusion. That’s what Ripper expert Richard Jones believes (telling the BBC so, just a few days ago), and I find it hard to imagine he’s making this up even though he admittedly makes his living off the world’s morbid fascination with the Ripper. Mr Jones has written two books, ‘Uncovering Jack the Ripper’s London’ and ‘Jack the Ripper: The Casebook’. He also offers tours of the grisliest parts of the Ripper story.

But he seems to think the mystery will be solved by roughly 2030, when the mental asylum records of at least two likely candidates for The Ripper will become publicly available. One or the other might reveal guilt.

Or then again, perhaps not. And the gruesome story will continue a mystery.