Toy story: The museum that is finally giving the rubber duck its due 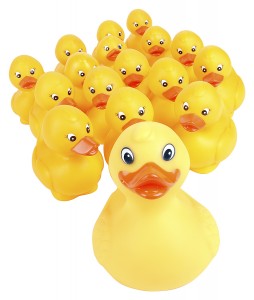 I remembered American writer Terry Brooks when I read The Economist’s Schumpeter blog about the simple treasures stored at the National Museum of Play in Rochester, New York. Last week, the Museum apparently inducted the rubber duck (everyone’s favourite toy since the late 1800s, when it didn’t yet float) on the basis that it was widely recognised, had longevity, fostered creativity and changed play or the way toys are made.

I’m not sure if Mr Brooks ever had a rubber duck or not but he’s on record to say that he didn’t have a lot of toys as a child and “personal entertainment depended on individual ingenuity and imagination – think up a story and go live it for an afternoon.” That seems to have done him no harm and he went on to become a bestselling author presumably using the imaginitive skills he’d honed as a child with few oys.

Perhaps too many toys might have made him too literal? Less inclined to let the imagination gallop away, borne on the wet back of a rubber aquatic being that has magically metamorphosed into Superduck.

What is the purpose of toys if not to dream?

Incidentally, the Museum pays full tribute to this with some of its other inductees: the cardboard box (can be a castle or an outhouse); the stick, ball, blanket and playing cards. As the collection’s curator acknowledges, the only limit to a toy is a child’s own imagination.