Now that the Loya Jirga is meeting in Kabul, remember the Karzai style that the Western media leveraged into statesmanship back in 2002 in the heady days after the Taliban were sent packing? Tom Ford of Gucci praised the Afghan president as the chic-est man on the planet (sic). The Washington Post’s Style section discerned “a lot of Hollywood in the man”, complete with “the natural sex appeal of a Sean Connery”.  The karakul cap, the flowing green-and-blue robe? The air of bullish determination? 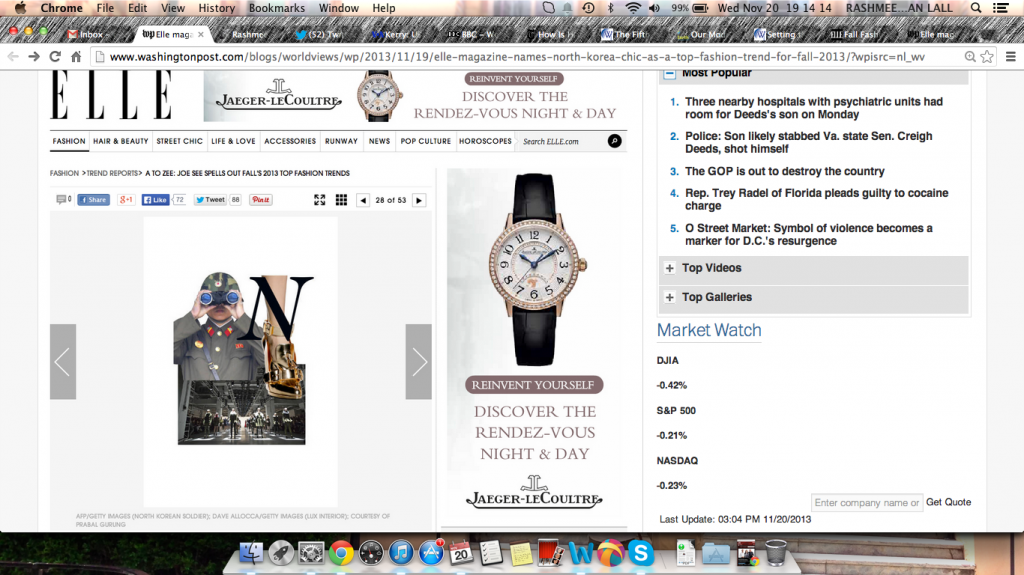 Clearly, fashion can worship at the most unlikely altars. So to North Korea and who could have expected to see the word ‘chic’ in the same sentence as that walled-off fiefdom of the Kims?

Elle magazine made it possible on Wednesday morning, as Max Fisher recorded in his Washington Post blog. He cannily took a screen shot of the magazine’s top fashion trends from Pyongyang way for Fall 2013. It’s just as well he did. By Wednesday evening, the piece had mysteriously disappeared from the website.

Courtesy Mr Fisher, however, we now know what purports to be ‘North Korea Chic’. It includes a pair of designer camouflage pants at $425 a pop, which is apparently part of the usual arsenal of military-themed fashion trends, only “edgier, even dangerous.”

Never underestimate the fashion industry’s search for ever more off-grid solutions to the staid and predictable.