Her story: Of Non-American Blacks and the Oppression Olympics 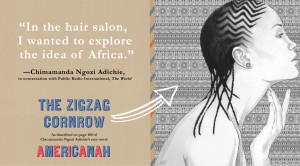 I read Chimamanda Ngozi Adichi’s third novel ‘Americanah’ in 10 hours flat. It’s a fat book, so that’s a bit of a feat. Testimony not to how fast I read (though I admit to being a bit modest – I do read very fast) but how well Ms Adichi writes, how little affectation there is in her storytelling, how pitch perfect her prose.

As she has displayed in her other, beautiful novels, Purple Hibiscus and Half of a Yellow Sun, Ms Adichi is able to beautifully and seamlessly combine a love story with a strong comment on identity, loss and loneliness.

In Purple Hibiscus, it was about religious zealotry, psychological and physical cruelty and the tender sprouting of hope within the main protagonist – 15-year-old Kambili –  and her brother that their lives will be better one day.

In Half of a Yellow Sun, it was the toll the Biafran war takes on six people – a high-ranking politician, a university professor, a British citizen, a houseboy and two sisters, Olanna and Kainene.

In Americanah, it is spirited student Ifemelu who finds that she has become black when she arrives in America from Nigeria and quite suddenly loses her new interest in race when she returns.

The novel is a masterful dissection of race, particularly in the US and Ms Adichi can probably take credit for ferrying the Non-American Black mainstream, as also the Oppression Olympics, which is “what smart liberal Americans say to make you feel stupid and to make you shut up (when you talk about racism).”