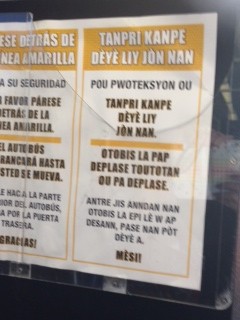 It was only when I saw the kreyol notices in the bus that I remembered what everyone already knew – that Broward County, Florida, has a large Haitian population.

How large is large?

Big enough to warrant public directions in kreyol, one of just three languages represented. The others are English and Spanish.

According to this paper by the Country’s Planning Services Division, census 2000 put Broward’s ethnically Haitian population at 62,342 or 3.8%. A decade later it’s supposedly gone up to just under 6%,  the County’s largest population of immigrants.

In a demographic illustration of the ebbs and flows of Haiti’s contemporary history, in 1980, only 1,849 Haitians lived in Broward County but by 2000, it had risen to 47,445 people who reported Haiti as their birth place. They were generally much younger than the age range in Broward County, which typically hovers at 75 or more. This means the County can be reliably expected to get more Haitian as these residents have children and they, in turn, do the same.