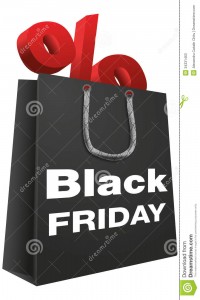 A little like McDonald’s (or even the baseball cap worn backwards) , Black Friday is becoming an American cultural export. Often enough, like the baseball cap, it’s popping up in places where it seems simply absurd. And a useless affectation. Britain, for instance. This year, ASDA , the British avataar of Walmart, announced its ‘Walmart’s Black Friday by ASDA’ campaign, thereby setting retailers atwitter with expectation. But it will take a while for the idea to percolate. Yesterday, November 29, one heard armies of mystified British shoppers on the BBC expressing their bewilderment at Black Friday as they bumbled around the high street in London. They couldn’t really understand why everyone considered it important they go shopping that particular Friday.

For, even though Black Friday has been the biggest shopping day of the year in the biggest economy in the world from 2003, it doesn’t represent anything particularly universal except most commercial establishments’ desire to make money. That’s what explains the proliferation of special days on the shopping calendar – Cyber Monday, Small Business Saturday and Mexico’s El Buen Fin.

It’s all about successful re-branding. In a remarkable re-invention, Philadelphia’s much disliked traffic congestion the Friday after Thanksgiving, acquired new life and focus as a retail-fest without parallel.

The Canadians cannily bought into the concept (mainly to stop their shoppers from heading for all those Black Friday deals in the States); so have the Mexicans and now, it seems to be heading for anywhere else that sees the chance of making more money, faster, by creating a special consume-fest.

China recently acquired a Singles Day, helping to shift, as the BBC reports, two million bras in one hour, “a pile that would be three times higher than Mount Everest”.

But as George Mason economics professor Tyler Cowen once noted, some countries remain stubbornly resistant to American cultural exports. In a 2007 piece for The New York Times, Mr Cowen wrote about the significance of American movies and music doing “very well in some countries like Sweden and less well in others like India.”

He diagnosed “decisions to consume culture” as mainly economic ones and declared that “economic growth is booming in countries where American popular culture does not dominate, namely India and China.” He predicted that “American entertainment, for largely economic reasons, will lose relative standing in the global marketplace.”

Nothing could be further from the truth. Of course, Mr Cowen was writing at a time the BRICS seemed set for an exciting trajectory of explosive growth for at least 50 years. He could not have foreseen the rather less vibrant picture of the BRICS in 2013.

That said, he was right on one count. That “American cultural products” may come to rely increasing on non-American talent and international symbols and settings.

Remember MTV’s long-ago decision to wear a turban for the Indian market?