Saudi #women: Photographs that bare the sheer facelessness of life 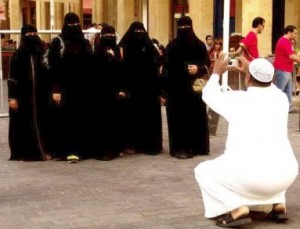 Olivia Arthur’s photographs of Saudi women, in their homes, often demurely unidentifiable, remind me of this one (to the right). It has floated around the internet for ages. Some used to joke that it should be titled “what’s the point?” because one burqa-clad woman is much like another and it was surely pointless to photograph five, all looking the same, like crows on the street.

Could the same argument be advanced for Ms Arthur’s photographs? I think not.

As described in this Slate blog, it was a challenge for her to find a way to take photos without violating the women‘s sense of modesty.  She had to get creative, sometimes capturing only a woman’s legs peeking from behind a wall, for instance, or rephotographing some of her prints with a flash to obscure a face.

“In the beginning it was frustrating. I thought I had all these pictures that I wouldn’t be able to use, and it took me a really long time to figure out how to use them. But in the end I think it helps the work. It represents the strangeness, the facelessness of so much of life there,” says Ms Arthur.

The facelesslessness of life. A photo can really bare all.