Endangered European little donkey, do not falter, there’s a star ahead 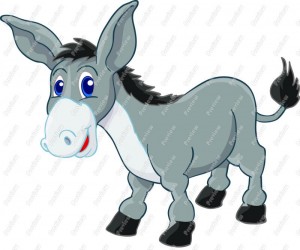 Now that it’s December, tis the season to think about the little donkey. Soon, it might be hard to find a single donkey in Europe. Anyone who thinks this is a jokey assertion and that the sentence proceeds into a story about fatheads in the Old World is wrong. The European donkey is in rather a bad way, even in the highlands of northeastern Portugal where it has been valued for hundreds of years.

The New York Times says that the Miranda donkey, named after the area where it lives, is is increasingly being displaced by mechanised equipment and is “threatened by declining population and dependent for its survival on subsidies from the European Union.” This is obviously a difficult situation with the donkey subsidy facing budget cuts amid declining enthusiasm for the species as a whole. Apparently, it’s only the subsidy – $230 a year for each animal – that has driven many farmers to keep their donkeys.

This begs the question, why subsidise something that is so patently out of time and makes such little economic sense? As a species, it seems, the donkey is increasingly at risk with just about 1,000 each of 30 European breeds. But Thomas E. Lovejoy of the Smithsonian Institution in Washington, D.C., says it is short-sighted to allow the extinction of an endangered species that has no practical use to humans (apart from their aesthetic appeal or their intellectual interest to biologists). This, because the species can be said to have “no known practical use given our current state of knowledge”.

He cites the Pacific Yew as an example. It “was considered a trash tee until taxol, a compound found in its bark, was discovered to be a powerful drug against ovarian, lung and other cancers,” he writes. Mr Lovejoy adds that species are like books in a library and they “have value (some of it practical) that may become apparent only when they are studied closely.”