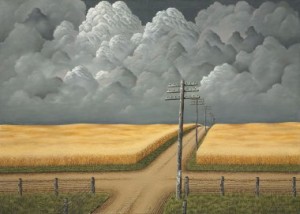 I thought about John Rogers Cox’s ‘Gray and Gold’ as I read Amit Sood’s interview in The Guardian. Mr Sood is a programmer who had a big idea and a bit of luck and is now director of the Google Cultural Institute in Paris. This non-profit branch of the internet giant offers thousands of works of art online from at least 60 museums in roughly 44 countries. As Mr Sood says , “we have over 300 partners … who actively contribute to the project, putting up anything from street art in Sao Paulo to some of the most important impressionist painting of our time.” He believes it’s a jolly good thing and drives people into bricks-and-mortar museums and galleries, rather than away from them.

I’m sure he’s got a point. There is a decided democratic rush to be cultivated and artistically enhanced. It always helps if the trigger is free. And remember, there was a pronounced spike in attendance of live music performances after it became ridiculously easy to take music for free off the net.

That said, I wonder if I would’ve gone to see Cox’s ‘Gray and Gold’, an oil on canvas in the permanent collection at the Cleveland Museum of Art, had I first looked at it online through the Google Cultural Institute?

The painting, which Cox produced soon after the US joined WWII, is dramatic and bleakly beautiful. The photograph in this blog does not do it justice. The Google Institute offers high-resolution images, which is sure to make a difference, but nothing can substitute for seeing it ‘live’ (so to speak).

The painting depicts fields of wheat under storm clouds; an election poster is tacked to an electricity pole. It suggest the interface between rural and urban life; politics and stormy weather; agriculture and economic change. Critics say it portrays the dramatic contrast between the positive and negative forces of nature. To me, it shouts America at a certain point of time.

I wonder if Mr Sood’s Institute would’ve prodded me into a special attempt to see it for real. But having done so, I’ve googled it dozens of times since. Sometimes, just to look at it again and glory in its nuanced depiction of American life in a time of great change.