Which passport is best visa for the planet? Finn, UK? Clue, it’s not American 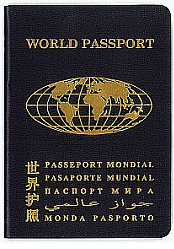 “Citizenship planning” appears to be a expensive and much sought-after service, but I didn’t realize this till I happended upon this report on how the Pakistani passport is one of the worst travel documents in the world (followed only by the Somali, Iraqi and Afghan, in that order ).

The information came from a press release issued in late July by Henley & Partners, a British firm that describes itself as “the global leader in residence and citizenship planning”. It cheerfully admits to coining its job description “more than 15 years ago”, says it caters to “wealthy individuals and families” and since 2006, has compiled a “global ranking of countries based on the freedom of travel for their citizens” in collaboration with International Air Transport Association.

Called the Visa Restrictions Index, it basically seems to tell you which passport is best for you to carry depending on what you need it for.

I’m guessing, for instance, that Alejandro Cao de Benós de Les y Pérez, the only Westerner ever employed by the North Korean government, finds it enormously convenient to have his Spanish and North Korean passports. It won’t much matter to him that North Korea is not on the Visa Restriction Index at all.

But t’was well said that no matter the access granted by your citizenship, there is nothing more miserable in the world than to arrive in paradise and look like your passport photo.

Anyway, the Index is interesting for all sorts of reasons.

If you thought an American passport brought you most access to destinations around the world, you’re wrong.

Finland, Sweden and the United Kingdom jointly take top spot; these passports guarantee visa-free access to 173 countries and so probably the closest to a “world passport”.

In joint second place are Denmark, Germany, Luxembourg and the USA. These passports guarantee access to 172 countries.

Joint number three, with visa-free access to 171 countries are Belgium, Italy and the Netherlands.

Canada is fourth with 170 countries.

And on it goes. India is in joint 74th place (along with the Dominican Republic and Uzbekistan) all of whose passports give visa-free access to 52 countries. Haiti, the DR’s island neighbour is not far behind. Its passports allow access to 46 countries.