This holiday, shop till you save the world, one ethical garment at a time 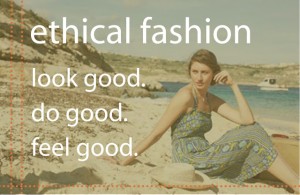 It’s too late for us now anyway (being in Haiti, you either buy locally, or allow enough time for items to be shipped in from overseas) but I was rather persuaded by this article on holiday-shopping in The Nation. It sets out to offer, as the headline says, six ways to shop this holiday season that will “have undeniable positive social and economic benefits”. For Bangladeshi garment factory workers, to take just one example. For our consciences. For the world in general.

In terms of fashion, the writer, Elizabeth Cline, must know what she’s talking about. Her bio describes her as the author of ‘Overdressed: The Shockingly High Cost of Cheap Fashion’. Unsurprisingly, she suggests  finding fashion “that’s fair”. She recommends  ethically sourced online retailers (not all of whom are expensive, she claims) and for those who shop at chain stores, over 100 major brands that have signed a legally binding agreement to pay for safety improvements in the garment factories in Bangladesh.

Ms Cline’s advice comes right after some rather good news from Australia, where Target Australia and Pacific Brands are now willing to publish the location of the Bangladeshi factories that supply their stores in order to allow human rights groups (and presumably journalists too) to check on the conditions of workers. It is being described as a ”watershed moment” for Australian retailers. As well as Aussie consumer preferences.

Would that this be exported around the world. Holiday season or not.